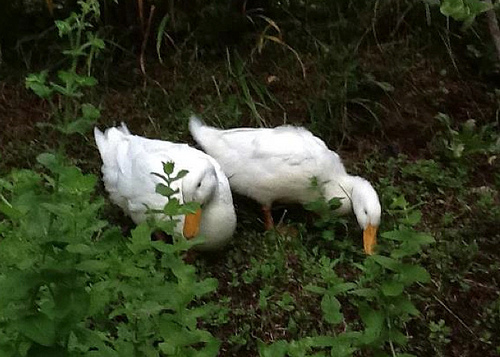 Easter’s downy ducklings are now grown, and have begun producing eggs. Beginning three days ago we were finding one or two chicken-sized eggs in the coop when letting the ‘kids’ out in the morning from their secured night quarters. In fact, we amassed a total of 5 eggs over the weekend, began to wonder if maybe both ducks were female. There are several unscientific ways to try and figure out the sex of Pekin ducks, but none of them are very reliable. Worse, Pekin ducks are notorious for laying eggs wherever they happen to be when the mood strikes, and promptly forgetting it ever happened – described in the literature as “no maternal instinct to speak of.”

We’ve not found any out and about the yard yet, so perhaps our ducks will prove to be the exception and lay in their coop at night instead of littering the yard. Though since one of them is laying two during the night, I expect we’ll find some Easter presents here and there over time.

This morning when I opened the coop there was one chicken-sized duck egg, and one that was at least twice that size – a real monster of an egg that won’t fit into the egg crate! Given that ducks come in all sizes like people do, we will now have to re-name our presumed male, who is much heavier than the other and isn’t a male at all. We had scrambled duck eggs for Sunday brunch and they were delicious, but my family simply doesn’t eat enough eggs to keep up with production at this rate. Luckily grandson’s girlfriend has a co-worker who is eager to buy any and all fresh duck eggs we want to sell, and will pay 75¢ apiece for them. Though I’m going to charge a dollar for the Super-Size.

Doing my homework, I have found that duck eggs are higher in protein than chicken eggs, and the yolks are higher in fat. Overall significantly higher in nutritional value than chicken eggs but take a little getting used to. They taste fine, but if you used them in baking – like a cake – you need to cut back on the shortening (butter or Crisco) or it’ll turn out too rich. For omelets you’ll want to add a bit of water to thin them out some, but far as I can tell they can be prepared in all the same ways chicken eggs can be cooked – hard boiled, fried, scrambled, etc. Whipping whites takes a little more effort to get them started, but they hold their foam and shape even better than chicken eggs.

I’ll put all the money I make from selling the eggs in an “Egg Money” jar atop the ‘fridge, and that should pretty much offset the cost of bedding and feed. The eggs are said to keep up to 2 weeks without refrigeration, a month if they’re kept cold. Which is good, so there will be half a dozen at least for the customer, though I might sell the big ones one at a time.

Still haven’t managed to install the duck pond, though we have started digging. So the kids are still stuck with one of those cheap plastic kiddie pools, which I move around the yard every couple of days so it doesn’t kill the grass. They’ve got their sliding form down pat on the porch ramp, make us laugh regularly by how much they enjoy it. Figure we’ll next have to teach them to skateboard, and if we can manage to get Gladys to say “Aflac” WHILE skateboarding, we can make a fortune!

All in all, the ducks have proven to be wonderfully funny pets, love hanging out with people and other critters, and have even turned out to be excellent snake alarms. They keep the yard and garden picked fairly clean of slugs and bugs, don’t manage to snag butterflies very often. Their favorite thing is to take walks with us whenever we go to the top of the drive to get a cell phone signal, and chase the cats around the yard with their necks down and wings half outstretched as if that were the funniest thing ever. The cats don’t agree, but the dogs think it’s highly humorous.

Last but not least, we’ve figured out where the term “Lame Duck” comes from. Our fat used-to-be male duck can’t see his feet when he’s waddling around on the hillside, has taken several tumbles that have us considering some kind of barrier that would prevent the ducks from getting that far up the hill. Sprained his ankles so badly I was afraid they were broken, so I had to sit out with him all day for a week to make sure he didn’t wander uphill and learned to lie down when not actually trying to get somewhere. Poor thing was so lame he… er, she, didn’t know which leg to limp on. Googled to see what was to be done and discovered that these big ducks sprain their ankles quite regularly. I could wrap them, but that’s a difficult feat that would only last as long as it took for the duck to go swimming, so I didn’t bother. 50 mg. ibuprophen – I got the 100 mg. children’s chewables and half them – worked great as an anti-inflammatory and she’s much better now. More careful as well, which is fine with me.

Autumn project is to tear out the entire back deck so it can be re-planked, the old wood is rotten and beginning to give way. That will allow us to lay a concrete pad underneath, onto which we can put the coop – we’ll have it on lawn mower sized wheels to roll out for cleaning. Can go ahead and put in a concrete half-pipe drain next to the basement wall at the same time, which should finally cure the flooding issue every time it rains hard. Which around here, is every day all summer.

Previous Posts to this series: 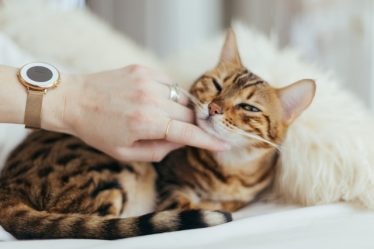