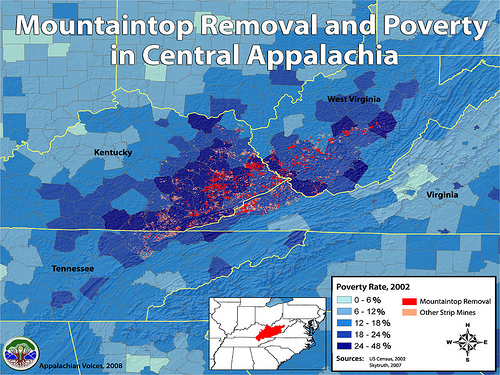 The ‘Breaking News’ headline at the anti-mountaintop removal website I Love Mountains brings tears to the grateful eyes of we lovers of these ancient, beautiful and abundant mountains…

Obama’s new EPA administrator Lisa Jackson announced this past Tuesday that the agency would be delaying somewhere between 150 and 250 permits issued by the US Army Corps of Engineers to coal companies to flatten mountains and destroy watersheds in their desperate quest to extract the last of the sequestered coal with as few paid miners as possible.

What the EPA will be reviewing are blatant violations of clean water regulations former President G.W. Bush waived in his 2002 “fill rule” and a last days repeal of the stream buffer zone rule that would allow coal companies to ignore any and all impacts of the water supplies of rural residents, towns and cities dependent upon these mountain streams for drinking water supplies.

The map above (h/t Appalachian Voices) shows graphically how open strip mines and MTR directly affects the very poorest regions of Appalachia. One might suspect that these areas are happy to have the good jobs these operations offer, but the reality is that this kind of mining is equipment-reliant, done with machines and not men. For instance, King Coal once provided 120,000 decent paying jobs in West Virginia, but now fewer than 20,000 citizens call themselves coal miners. The people whose environment is being raped are getting nothing of value out of the deal. And may indeed be harmed significantly as their water supplies are systematically polluted, sickening their crops, livestock and families.

As reported on this blog in several posts linked below, some of the people in these poor counties have better ideas about what to do with their mountains, things that will improve everyone’s life, make them leaders in clean, renewable energy supplies, and create green jobs for local residents. Especially check out projects like Coal River Wind, which proposes to harvest the wind instead of the mountain itself.

Another great article with good links and pictures is Hope is Alive in Appalachia!!! by Kossack ‘faithfull’. So get off your duff – call some legislators, sign some petitions, and spread some love of mountains in your circle today! 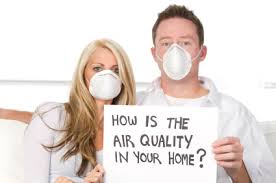